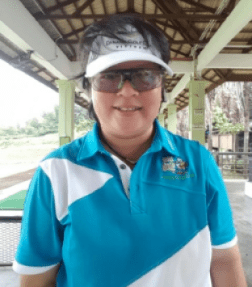 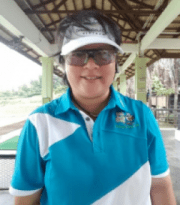 A certified golf instructor graduated from numerous golf enhancement Programmes in Australia and Malaysia. Her forte is in training and guiding young children through various Junior Golf Programmes. She believes that golf should be fun and easy for the kids.

International Appointment
SNAGGOLF (USA) has appointed her to be the Chief SNAGGOLF Trainer for the region of ASEAN.

She took a step ahead to pursuing a Diploma In Applied Psychology (Australia) to be incorporate into golf teaching which. She is a Level II Harold’s Swash Putting School Of Excellence (UK) accredited instructor. She developed the golf-related intelligence approach in our teaching system which follows closely with the famous Howard Gardner’s Theory Of Multiple Intelligence.

With more than 16 years in kids training, she is an expert in child behavior shaping and the development of kids training programs. Over the years she has successfully groomed and inspired many of her students to be top players in their respective categories, of which some has even gone for some international competitions.

Be the first to write a review!

Login to leave a review

START YOUR JOURNEY WITH US

Your reached the limit of ads. Please upgrade your plan.